Markey wrote, “Results suggest patients with advanced brain cancer have a survival benefit with Ziopharm’s interleukin-12 (IL-12) gene therapy […] The therapy has been well tolerated. IL-12 is such a powerful immune stimulant that it has caused severe toxicities when administered directly to patients. The gene therapy containing the RheoSwitch offers a safer approach by controlling IL-12 expression. In four patients of Ziopharm’s trial veledimex treatment was suspended due to adverse events (e.g., leukocytopenia and thrombocytopenia), and the toxicity subsided. The common reactions were headache, nausea/vomiting, fever, white blood cell or platelet decline, and altered liver function […] The Company has several options for future IL-12 studies. Ziopharm will probably meet with the FDA and EMA later this year to discuss a pivotal trial of the monotherapy.”

The analyst reiterated a Buy rating on shares of Ziopharm, with a price target of $21, which represents a potential upside of 200% from where the stock is currently trading.

Out of the 5 analysts polled by TipRanks, 1 rates Ziopharm stock a Buy, 3 rate the stock a Hold and 1 recommends to Sell. With a return potential of 81%, the stock’s consensus target price stands at $12.67. 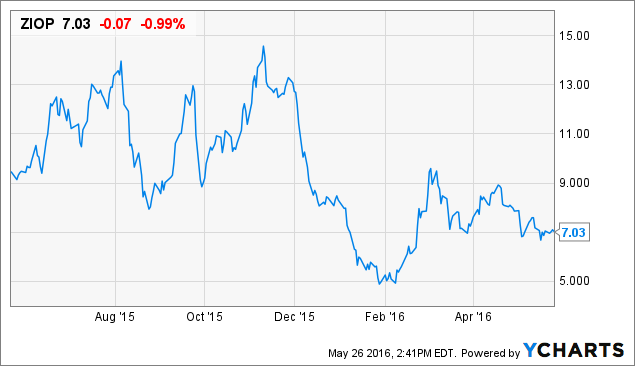