In a research report issued yesterday, Griffin analyst Keith Markey reiterated a Buy rating on shares of Synthetic Biologics Inc (NYSEMKT:SYN) and raised the price target to $9 (from $6.75), as he believes that SYN shares will rebound and reach new heights following the upcoming Phase 2 data announcement of a drug to prevent C. difficile infections.

Markey wrote, “Various factors may have contributed to the stock’s price weakness of late. The most obvious is a shift in sentiment away from biotech stocks. Another is that some investors may have expected a quick partnering of Trimesta to provide a nondilutive source of capital. Such a deal is still possible, but probably not imminent. And while the Company has sufficient cash to support operations comfortably into next year, a $200 million shelf registration was filed recently to prepare for a future financing as needed.”

“Synthetic has two drugs in Phase 2 trials with data due in the next six months. Licensing deals may provide upfront fees, R&D support, milestone payments, and/or royalties. Three other programs are at earlier stages of development,” the analyst added.

Out of the 3 analysts polled by TipRanks, 2 rate Synthetic Biologics stock a Buy, while 1 rates the stock a Hold. With a return potential of 193.2%, the stock’s consensus target price stands at $6.33. 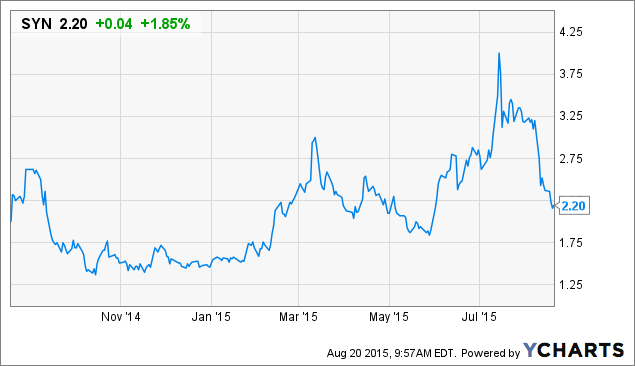