Griffin’s healthcare analyst Keith Markey was out pounding the table on ZIOPHARM Oncology Inc. (NASDAQ:ZIOP), reiterating a Buy rating and price target of $21, which implies an upside of 76% from current levels.

Markey wrote, “Several events should increase excitement in the months ahead. The Company will be presenting at six scientific meetings before year end, and up to five CAR T-cell therapies will be in clinical development. Besides any studies that MerckSerono might initiate, clinical trials are under way to evaluate CARs for leukemia and lymphoid cancers, and a next-generation CD19CAR.”

Furthermore, “We believe presentations based on the trials of the intra-tumoral IL-12 gene therapy Ad-RTS-IL12 and clinical data from CAR T-cell studies will drive the Company’s valuation higher through 2016. The data may also lead to a partnering agreement(s) with a major pharmaceutical company. Meanwhile, Ziopharm has ample cash to support operations into 2018.”

Out of the 4 analysts polled by TipRanks, 3 rate Ziopharm Oncology stock a Hold, while 1 rates the stock a Buy. With a return potential of 15%, the stock’s consensus target price stands at $13.67. 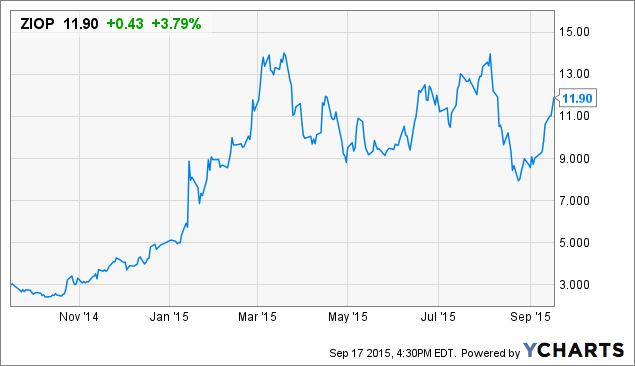