Piper Jaffray analyst Erinn Murphy came out today with a research report on GoPro Inc (NASDAQ:GPRO), introducing a proprietary index used to track the relative strength of GoPro’s offering at retail. The index tracks GoPro’s ranking among the 100 best selling items in Amazon’s electronics category every weekday and contains data going back to October 2014.

Murphy wrote, “Our index in the exhibits that follow shows sequential acceleration in Amazon rankings during Q2 – particularly in May as all cameras’ ranks in the top 100 have improved except the HERO which remained flat. This includes the HERO4 Black ($500), HERO4 Silver ($400), the HERO ($130), the HERO3+ Silver ($300) and the HERO3 White ($200). The former three devices form the “new” category that launched at retail in Fall 2014 while the latter two form the “legacy” category which has been on the market for over two years.”

“Our index indicates GoPro is still seeing solid sales momentum for its legacy products. Specifically, sell-through trends for the legacy category have generally mirrored that of the new category and legacy product contribution to the overall GoPro share is tracking just above its long-term average of 25%. We will be monitoring this dynamic closely as we believe the market for action cameras will continue to expand in the interim before a new launch so long as legacy tracks closely to the performance of new products.”, the analyst added.

The analyst reiterated an Overweight rating on GoPro shares, with a price target of $66, which implies an upside of 16% from current levels. 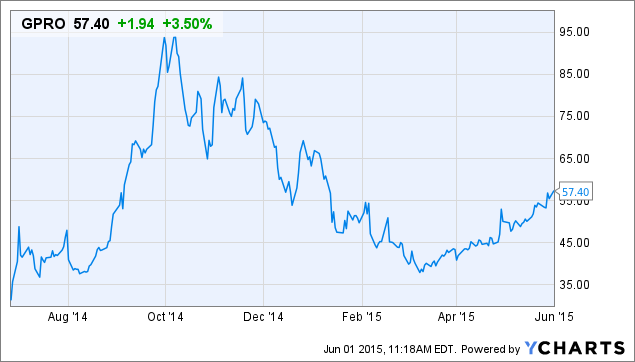