Pachter noted, “As we discussed in our Earnings Preview note, on a rolling six-month basis, revenue was up 65% in Q4:14 and 62% in Q1:15, but Q2:15 consensus of $334 million implied only 39% growth. Initial guidance for revenue of $380 – 400 million implies 1H growth of roughly 55 – 59%. EPS guidance of $0.26 – 0.28 was also well above the consensus figure of $0.16. Although we have significantly increased our estimates for FY:15 and expect continued growth in FY:16, growth may exceed even our bullish expectations should the company introduce a line of products that was incremental to action camcorders and accessories, or if it were to more effectively monetize its entertainment efforts. International expansion should also be beneficial to earnings as R&D expenses are spread against a much larger installed base.”

The anayst concluded, “Although GoPro trades at a premium to many of its consumer electronics peers, we believe it deserves a high multiple due to its nascent and rapidly growing addressable market, the phenomenal benefits of its viral free marketing, its ability to reinvest in leading edge technology and design, and its strong brand that permits premium pricing for its products. Should GoPro exceed our estimates once again in future periods, we believe that its multiple has the potential to expand; should it misstep and see its revenue or contribution margin growth begin to stall, we believe its multiple will contract.”

The analyst maintained an Outperform rating and a 12-month price target of $70. 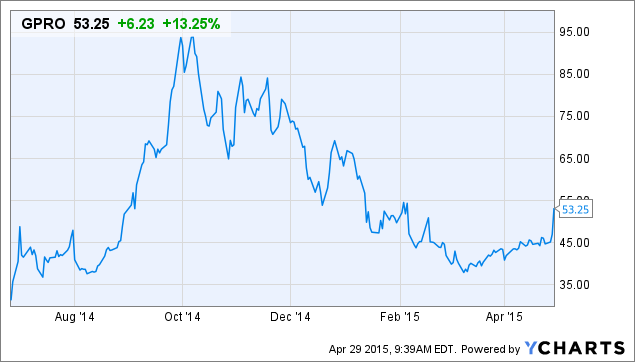