In a research note released today, William Blair analyst Mark Miller reiterated coverage on GNC Holdings (GNC) with an Underperform rating as GNC is expected to report second-quarter earnings near the end of July.

Miller commented: “Since we downgraded GNC to Underperform in late January, sharesare down 37% (versus the S&P 500 up 7%). We recognize sentiment on GNC shareshas turned negative and that buy-side expectations are much lower than current sellside estimates. However, as longas estimates are being lowered, we believe it will be difficult for shares to work higher. We believe GNC is in the beginning stages of a rebase in earnings after the significant comp-store sales and margin outperformance over the past four years. This could play out over a multiyear period, in our view, and we believe the company could be closer to $2.50 in EPS over the next two years. Assuming a 30% operating margin on incremental sales, this estimate would imply a midsingle-digit comp store sales decline over this period (a low-single-digit decline per year)”.

According to TipRanks.com, which measures analysts and bloggers success rate based on how their calls perform, analyst Mark Miller currently has an average return of -1.8% and a 50% success rate. Miller is ranked #2736 out of 3155 analysts. 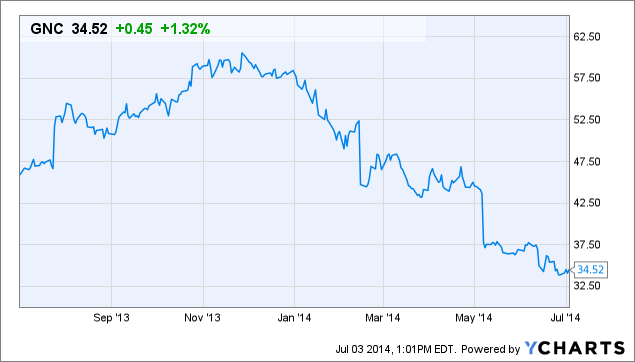