Miller wrote, “GNC’s second-quarter sales were $30 million below consensus, and operating EPS of $0.75 were $0.04 below the Street mean. More concerning is the second-half outlook for a midsingle-digit comp decline, particularly with the fourth quarter ostensibly being an easier comparison. On the positive front, management acknowledges that internal missteps have contributed to financial challenges and that they are not just a function of exogenous circumstances. Yet there is really no evidence that the proposed remedies (including reduced promotion, simplified pricing, and better marketing and merchandising) to address the issues will have the desired positive impact over the next several quarters. The bull case is that the stock is inexpensive and expectations have been reset to a reasonable level. Our concern that a series of initiatives to drive financial performance from 2009 to 2013 (product development, the Membership Price Program, and increased promotion) produced an unsustainable level of earnings and downside risk to projections is significant. Ask Kmart or JCPenney how easy it is to reverse customer expectations of waiting for the next deal”.

The analyst continued, “GNC shares have declined 38% since our rating downgrade from Market Perform to Underperform on January 22, 2014 (versus a 7% increase in the S&P 500 over the same period). The stock decline has largely been attributable to the concerns highlighted in our downgrade note as well as in our February 13 follow-up note, “No Longer Able to Pump Up Results.” While we believe the downside risk has moderated in view of the stock price decline, we recommend investors avoid shares given incremental downside risk to EPS estimates. With 2009 financial performance as a reference point (prior to what increasingly looks to be anomalous comp growth over the following four years), a significant step-down in earnings could still transpire, even relative to today’s downwardly revised expectations. Again, GNC was a 1% annual comp-store growth business leading up to 2009 before the 30% four-year stacked comp gain drove financial performance, allowing private-equity owners and management to execute multiple successful stock sales in subsequent years. Where is the insider buying today?”. 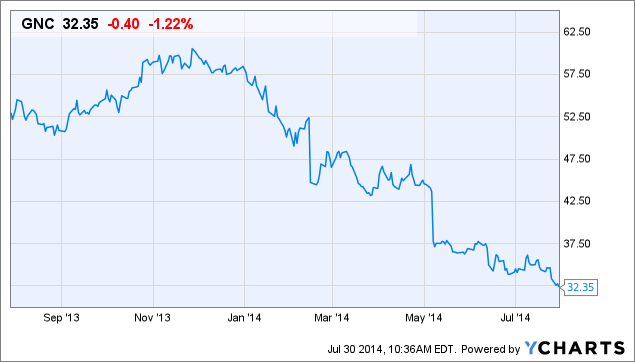