Galena Is Trying To Send A Positive Signal To The Street, Says Roth Capital

Galena Biopharma (GALE) announced today the resignation of CEO Mark Ahn and the instillation of COO, Mark Schwartz as its new CEO. In reaction to the resignation, Roth Capital analyst Joseph Pantginis today reiterated coverage on GALE with a Buy rating and a $7.00 price target.

Pantginis commented: “While the press release mentions that Dr. Ahn left to pursue other interests, itis unfortunate that this departure is, in our opinion, likely directly associatedwith the ongoing poor optics at the company. These optics revolve around 1)the company’s prior involvement with the Dream Team Group, 2) managementstock sales, 3) internal investigations and 4) ongoing SEC investigationsinto the associated stock sales and Dream Team Group involvement. All ofthese activities have significantly hurt the optics of the company, in our belief,but the CEO switch is an important message to the street. We have beenfocusing our efforts on the improving fundamentals at the company, whichinclude 1) a growing pipeline of developmental and approved products, 2)growing revenue streams from Abstral and the anticipated addition of Zuplenzin 1Q15, 3) GALE-401 (potentially improved safer and improved formulationof Angrelide) moving into Phase II, and 4) Galena’s leading role in developingimmunotherapy products which include NeuVax in an ongoing Phase III studyfor breast cancer, a Phase II for gastric cancer and GALE-301 as a vaccinecandidate for ovarian and endometrial cancer (ongoing Phase II).” 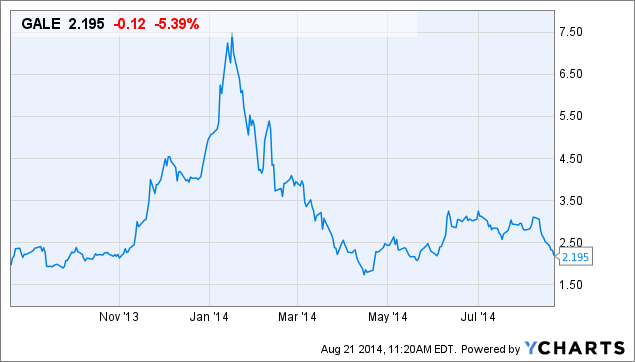