In a research note published yesterday, Roth Capital analyst Debjit Chattopadhyay reiterated a Buy rating on Sarepta Therapeutics (SRPT) with a $34 price target following the company’s most recent update on their progress where 144-week data showed waning of eteplirsen impact.

With regards to the data showed Chattopadhyay wrote, “We don’t believe it is the patient’s age at week-144 we should focus on, but the age of treatment initiation, which was 9.79 years. In our opinion, these boys had significant disease burden to show prolonged treatment benefit. Based on eteplirsen’s safety profile and the impact on disease stabilization, we believe that accelerated approval is likely”.

Chattopadhyay continued, “Eteplirsen is the first generation exon skipping compound, which was designed to stabilize patients for as long as possible, which in our opinion, it has amply demonstrated in older patients for over three years. Full clarity into the data should become available at the WMS Congress during the second week of October. We believe the next generation of peptide-modified exon skipping candidates are likely to take this a step further by increased permeability into appropriate cells, including the cardiomyocytes and the diaphragm”. She went on to say that “For long-term investors, we would recommend buying Sarepta at current levels as we continue to expect accelerated approval during 2H- 2015”. 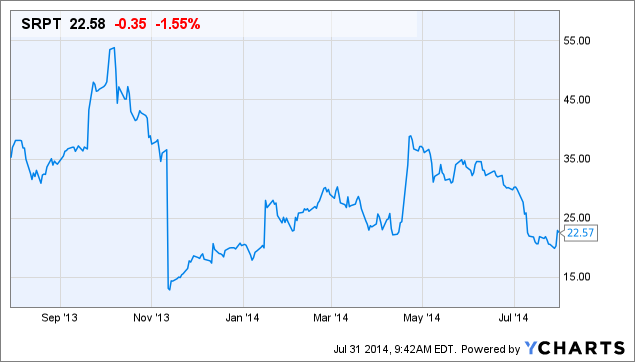