Five Below: The 3Q Release Will Favor The Bears, But It Should Present A Buying Opportunity, Says UBS

In a research report sent to investors today, UBS analyst Michael Lasser maintained a Buy rating on Five Below (NASDAQ:FIVE) and slightly reduced his price target to $48 (from $50), which implies an upside of 29% from current levels.

Lasser commened: “Clearly, there was a lot of noise in FIVE’s 3Q print. We believe the quarter itself will receive the least amount of attention, but was actually better than feared, with a 1.5% comp increase (vs UBSe of 0.5% and consensus of 0.9%). This pushed EPS to $0.06 (in line with the consensus). FIVE’s 3Q GM contracted -75 bps as it faced higher freight costs from port labor issues, which shaved $0.01 from its 3Q EPS. Also, it experienced occupancy deleverage on its 1.5% comp. FIVE accelerated imports due to port issues, driving up inventory per store 21% YoY.”

The analyst continued, “Many of these issues are temporary and should be resolved in the next quarter or two. But the focus will be in part on the guidance for 4Q, which calls for a 4% comp increase despite a uniquely easy comparison. We found the commentary around the holiday confusing, with FIVE noting Black Thursday and Friday were good, but the next 2 days were soft. We’re not in the camp that believes commenting on individual days is helpful, but we think this just creates a chance for the stock to become mispriced.” 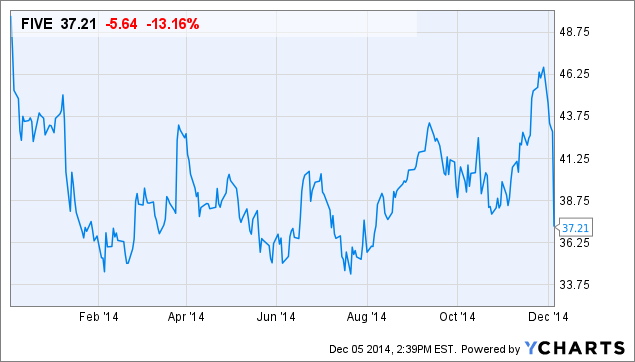