According to Rolland, “Most of the shortfall was due to demand concentration at the high end, including the iPhone that only utilizes Qualcomm’s baseband and Samsung’s GS6/Note 5, which increasingly uses home-grown chipsets. Additionally, management acknowledged a build of 4G Chinese handset inventory that needs to be drained into 4Q15.”

Furthermore, “While we expect QCT operating margins to increase over time, they were just 8% in C2Q15 and are expected to fall to an abysmal 2% to 4% in C3Q15 (we can see aggressive bears calling for negative margins if competition intensifies in 2016). We believe the poor guidance prompted management to implement a significant cost-cutting program, removing $1.4B in operating expenses.”

In reaction, the analyst reiterated a Market Perform rating on Qualcomm stock with a price target of $68, which represents a potential upside of 11% from where the stock is currently trading.

Out of the 35 analysts polled by TipRanks, 22 rate Qualcomm stock a Buy, 12 rate the stock a Hold and 1 recommends Sell. With a return potential of 24.3%, the stock’s consensus target price stands at $76.39. 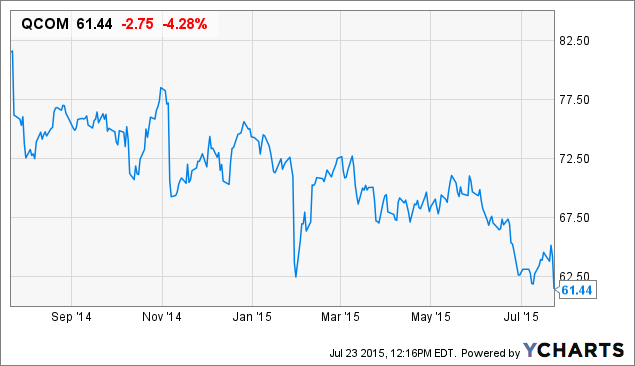