In a research report issued Tuesday, Feltl and Company analyst Jeffrey Schreiner reiterated a Hold rating on Cirrus Logic (NASDAQ:CRUS) with a $20 price target, as the company will report its 2QFY15 results on Wednesday, October 29, after the market close.

Schreiner noted, “We estimate core CRUS revenue of roughly $192m vs. consensus ~$187m. We believe unit volumes from recently released iPhone 6/Plus will drive higher revenue. Sequentially we expect revenue could be up as much as 30%, but year-year growth may only equal ~1-3% due to AAPL utilizing a legacy CRUS codec which required a substantial reduction in ASP for inclusion. We would note many estimates have suggested iPhone 6/Plus builds are up ~30+% year-year but CRUS revenue is not benefitting from what many have described as the most prolific product launch in AAPL’s history given ASP issues. Our September estimate assumes roughly 60m iPhone units shipped in AAPL’s December quarter. Recent acquisition WLF will add around half quarter of revenue/expenses (~$26m in rev/~$9m in OPEX). We estimate there could be one-time costs associated with the acquisition equaling ~$6m. We have lowered prior WLF OPEX contribution based on prior quarterly run rate. Based on better core CRUS, plus some WLF contribution, we anticipate non-GAAP EPS of ~$0.64 vs. consensus, ex-WLF, ~$0.54.”

The analyst continued, “Given its reliance on AAPL (~80% of revenues) CRUS typically see seasonal strength in September/December quarters due to the annual cadence of AAPL product launches. We see no difference in the upcoming 2HCY14, but believe following seasonal strength CRUS may lack investable catalysts. We are also concerned that AAPL may have pulled forward growth with the iPhone6/Plus launch, while the iPad, is in a structural decline. Even with increased content potential in next year’s iPhone, we wonder if volumes will equal what was offered by iPhone 6. We believe investors should fade any rallies in CRUS shares following AAPL launch. We are lowering our target to ~$20 equaling ~12.3x our CY15 EPS estimate.” 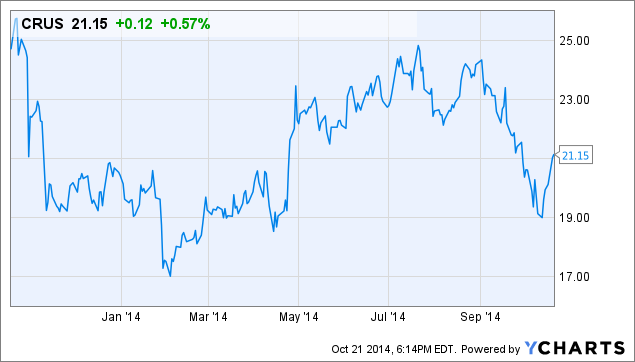