In a research report issued yesterday, Feltl and Company analyst Jeffrey Schreiner downgraded shares of Ezchip Semiconductor (NASDAQ:EZCH) to Buy rating with a price target of $25.50.

Schreiner observed, “We are reducing our 12-month price target to ~$25.50, down from ~$31, as we have reset our CY14 estimates based on EZCH’s announced reduction in its 3Q14 guidance, and lowered expectations for core EZCH/Tilera business in CY15. We believe prior long-term estimated growth catalysts, such as NPS, remain in place supported current and new customer adoption, along with the roughly ~$1B TAM expansion provided by Tilera. Prior inventory adjustments within EZCH have come, and gone. And while EZCH may be put in the “penalty box” by investors during the near-term, we expect the same with todays announced revision. Following the Tilera acquisition EZCH will still have over ~$6/share in cash. While catalysts may be “pushed out” we recommend investors continue to accumulate EZCH shares as we view long-term growth opportunities as undervalued. October 6, 2014 “ 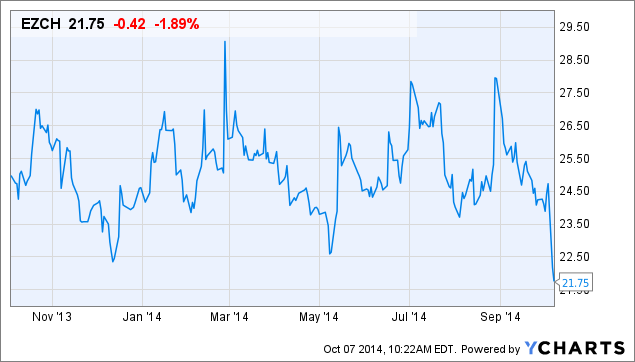