In a research note released this morning, Feltl and Company analyst Jeffrey Schreiner reiterated a Strong Buy on Synaptics (SYNA) and increased his price target to $105 (from $95), despite the recent drop in share value, which occurred due to concerns over the loss of Galaxy Note IV touch socket.

Schreiner commented, “Yesterday shares of SYNA traded lower by ~4.2% due in part to commentary suggesting the company may have loss the touch IC socket in the upcoming Galaxy Note IV to ST Microelectronics (STM). At first glance we were surprised by the assertion regarding STM, given STM has no major touch design wins to date. If true we believe STM’s design win could be equally, if not more negative, for shares of CY/ATML suggesting their touch products are potentially substandard to STM in Samsung’s eyes. Assuming the worst case scenario, we believe the loss of the Galaxy Note IV touch socket could reduce our revised FY15 revenues by ~$44m, and reduce our revised FY15 non-GAAP EPS by ~$0.30″.

The analyst added, “Based on industry discussions we expect SYNA will provide investors incremental positive information regarding its acquisition of Renesas SP during its upcoming Analyst Day. We believe this is a key driver in SYNA pushing out its Analyst Day from normal August timeframe, into September. We recommend investors utilize recent pullback to aggressively accumulate shares prior to June earnings, and expected additional data points regarding Renesas SP”.

According to TipRanks.com, which measures analysts and bloggers success rate based on how their calls perform, analyst Jeffrey Schreiner currently has a one-year average return of 6.8% and an 63% success rate. Schreiner has a 34.9% average return when recommending SYNA, and is ranked #859 out of 3217 analysts. 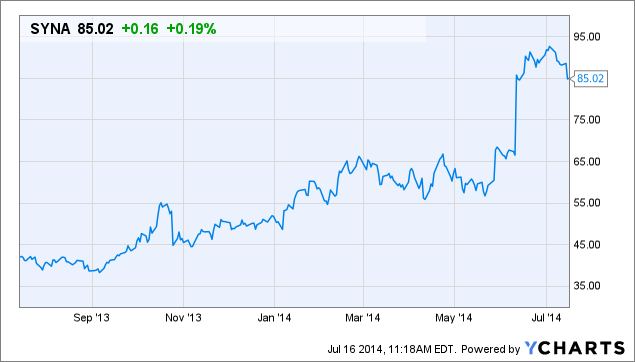 Zack’s Bull of the Day: Synaptics