Today, Feltl and Company analyst Jeffrey Schreiner issued a note in which he reiterated a Hold rating on Integrated Silicon Solution (ISSI) with a $15.50 price target in anticipation of June quarter results.

Schreiner noted, “Over the last 3 years ISSI’s June quarter has seen seasonal growth of ~6%, which would imply the high end of guidance could be achieved based on normal seasonal patterns. Weakness in USD-TWD exchange rate has already been factored into prior GM guide of ~33.5-34.5%. We estimate all ISSI product segments (SRAM, DRAM, Analog, and Flash) will likely deliver some level of sequential growth. On an end market basis we believe continued strength in industrial/auto will deliver double-digit y-y growth, but overall y-y revenue growth could be slightly less than March levels, without normal seasonality. If consensus is achieved it will equal a new quarterly revenue record for ISSI”.

Schreiner continued, “We believe estimated FY14 results reflect improving industrial markets, offsetting slowdown in leading end market auto, while benefitting from improved GM profile and controlled costs. As ISSI enters FY15 auto growth will likely remain constrained due to competitive pressures, and FY14 industrial growth, per ISSI’s own statements, is unsustainable. With GM opportunities almost maxed out (~35% peak), and cost controls likely unsustainable over the long-term, we believe the majority of near-term upside has been achieved. We feel ISSI will need to deliver “beat and raise” results in coming quarters to support meaningfully higher valuation. We remain on the sidelines awaiting either operational outperformance, or a pullback in shares, before becoming more constructive on ISSI”. 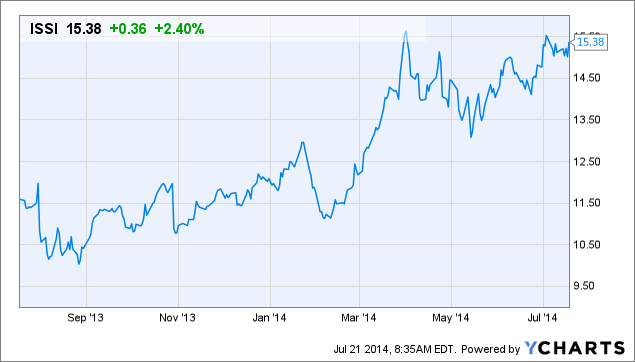