In a report released today, Feltl and Company analyst Jeffrey Schreiner reiterated a Hold rating on Cirrus Logic (CRUS) with a $21 price target, which suggests a potential downside of 12% from where the stock is currently trading.

Schreiner commented: “With investors suggesting the pending launch of the iPhone 6 will end world hunger, bring world peace, and cure all global diseases, we believe the potential for significant upside opportunity from our current iPhone estimates (CY14 – 179m, CY15 – 196m) could potentially occur, but likely carries a lower probability in our opinion. As historical patterns have once again occurred in CY14, seeing CRUS valuation increase ahead of the pending iPhone 6 launch, we believe the ability of iPhone builds to maintain current valuation is likely unsustainable. As the iPhone begins to ship we expect investors will turn their focus back to fundamentals, which suggests no EPS growth in FY15/FY16. This could potentially wipeout the majority of valuation gains to date. We would add that data points obtained following announced acquisition of Wolfson (WLF) suggest CRUS may have grossly overpaid. Per our checks, WLF was already in the process of closing its CA offices, suggesting the premium CRUS paid may not be warranted for a distressed business. We continue to remain on the sidelines as we see typical seasonal declines on the horizon, following iPhone launch”.

The analyst continued, “We believe CRUS may lack potential catalysts to grow EPS prior to FY17. We estimate that during CRUS’s FY14/15 ASP pressures within leading customer AAPL will be the main driver of forecasted year-year revenue/EPS declines. Entering FY16 we believe new 55nm products may allow for more stable ASP/GM profile. Our FY16 forecast suggests CRUS can grow revenues ~3% due to the estimated introduction of new product(s) into leading customer AAPL and new voice-enabled offerings. However, as potential top-line reacceleration may begin to gain some stable ground in FY16 we believe headwinds from the full utilization of deferred tax assets likely forces another step down in non-GAAP EPS. We think it could be a multi-year endeavor before CRUS may see a return to growth. In our opinion, CRUS shares trading at roughly ~14.3x our CY2015 non-GAAP EPS estimate of ~$1.47 are potentially overvalued”.

According to TipRanks.com, which measures analysts and bloggers success rate based on how their calls perform, analyst Jeffrey Schreiner currently has a one-year average return of 6.8% and an 63% success rate. Schreiner has a -6.3% average return when recommending CRUS, and is ranked #859 out of 3217 analysts. 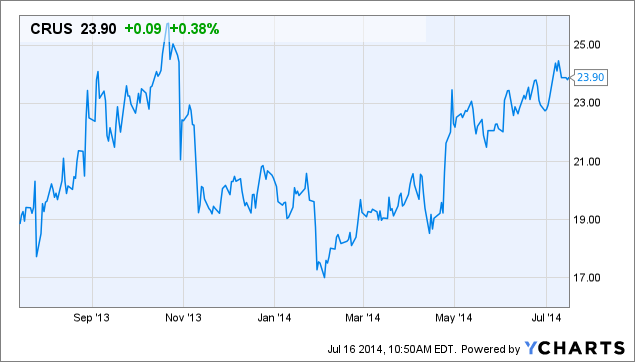