In a research report released Thursday, FBR analyst Edward White reiterated an Outperform rating on shares of Juno Therapeutics Inc (NASDAQ:JUNO) with a price target of $61, after hosting investor meetings with the company’s CFO Steve Harr last week. Juno shares closed today at $27.44, up $0.35 or 1.29%.

White noted, “Investors’ discussions focused on the company’s products in development for leukemia, lymphoma, multiple myeloma, and solid tumors. There were also discussions centering on manufacturing and cell persistence. We believe the company is different from competitors in its selection and activation of the cells, which can be credited in part to the attention it pays to process development. Management highlighted the multiple myeloma opportunity, and we believe that this indication will draw more investor interest in 2017. The company’s pipeline is deep, with several candidates and combination trials entering the clinic in 2017.”

As usual, we like to include the analyst’s trackrecord when reporting on new analyst notes. According to TipRanks.com, which measures analysts’ and bloggers’ success rate based on how their calls perform, analyst Edward White has a yearly average return of 4.2% and a 54.5% success rate. White has a -22.9% average return when recommending JUNO, and is ranked #789 out of 4182 analysts.

Out of the 14 analysts polled by TipRanks, 9 rate Juno Therapeutics stock a Buy, 4 rate the stock a Hold and 1 recommends to Sell. With a return potential of 70%, the stock’s consensus target price stands at $46.60. 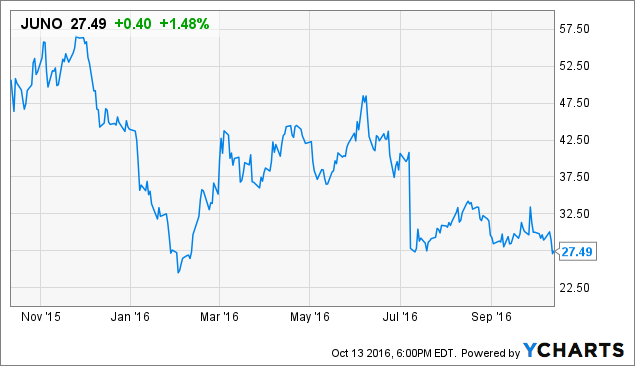