In a research report released Friday, FBR analyst Christopher James reiterated an Outperform rating on shares of CytRx Corporation (NASDAQ:CYTR), with an $8 price target, following recently released abstracts for the American Society of Clinical Oncology (ASCO 2016) Meeting to be held June 3 to June 7 in Chicago.

Among the abstracts, CytRx will present three abstracts highlighting aldoxorubicin’s use in several tumor types. The analyst believes that the strong presence at ASCO complements the pivotal phase III data readout with Aldoxorubicin expected in June.

James wrote, “We believe aldoxorubicin has the potential to be successful based on its potential to achieve greater efficacy than doxorubicin with notably less cardiotoxicity. We remind investors that doxorubicin’s use is limited by dose-related toxicities, despite being the standard of care for several tumor types. Overall, we believe the abstracts highlight key features of aldoxorubicin’s differentiated safety-efficacy profile and remain focused on the upcoming Phase III readout in STS.

Out of the 5 analysts polled by TipRanks, 4 rate Cytrx stock a Buy, while 1 rates the stock a Hold. With a return potential of 179.5%, the stock’s consensus target price stands at $6.63. 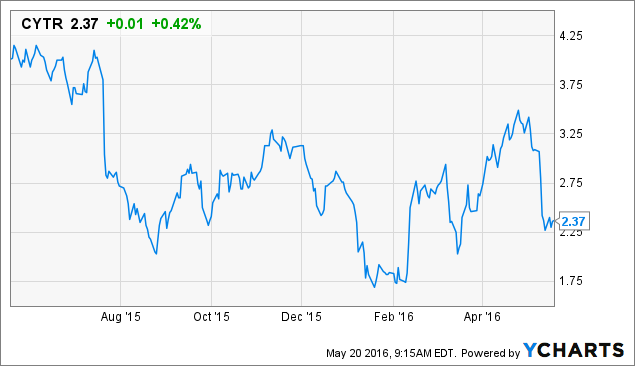