FBR Capital analyst Vernon Bernardino was out pounding the table on Aurinia Pharmaceuticals Inc (NASDAQ:AUPH), reiterating an Outperform rating and price target of $9.00, after the company announced positive 24-week data in 10 patients from the AURION study, an open-label exploratory study to assess the short-term predictors of response using voclosporin in combination with mycophenolate mofetil and oral corticosteroids in patients with active lupus nephritis (LN).

Bernardino commented, “Although results are from small numbers, we think the data are compelling for concluding VCS has significant potential as a treatment for LN. Recall that in June 2016, 57% (4 of 7 patients who completed 24 weeks of VCS) achieved a complete remission (CR) as measured by a urinary protein creatinine ratio (UPCR) of ≤0.5mg/mg, eGFR within 20% of baseline and concomitant steroid use of <5mg/day. The updated results show 70% (7/10) of patients achieved CR. Importantly, of the 10 patients that achieved reduced UPCR ≥25% at eight weeks, 80% were responders (≥50% reduction in UPCR vs. baseline) and 70% were in CR at 24 weeks. Biomarkers of inflammation such as C4, C4 and antidsDNA al continued to normalize over 24 weeks, and thus, appear predictive of long-term response to VCS.”

As usual, we recommend taking analyst notes with a grain of salt. According to TipRanks.com, which measures analysts’ and bloggers’ success rate based on how their calls perform, analyst Vernon Bernardino has a yearly average return of -15.5% and a 26% success rate. Bernardino has a 19.1% average return when recommending AUPH, and is ranked #4077 out of 4190 analysts.

As of this writing, all the 4 analysts polled by TipRanks rate Aurinia stock a Buy. With a return potential of 86%, the stock’s consensus target price stands at $9.50. 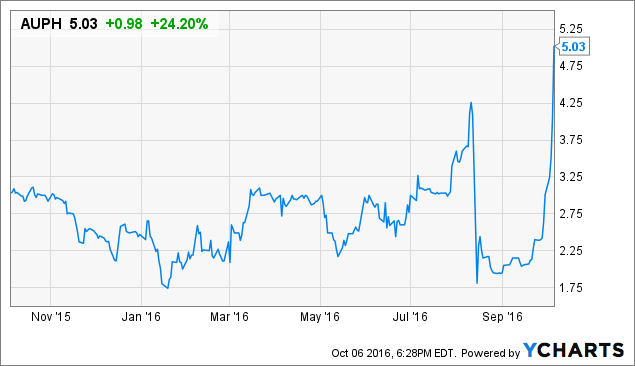