In a research report issued today, FBR analyst Christopher Rolland weighed in with a few observations on Atmel Corporation (NASDAQ:ATML). The report comes in response to a story published by Reuters and corroborated by multiple sources, claiming that Atmel had hired Qatalyst Partners to explore strategic alternatives for the company including a possible sale. The analyst maintained an Outperform rating on the stock, and raised the price target from $10.00 to $12.00.

Rolland observed, “We believe Atmel is 2.5 times more likely to be purchased than the average U.S. semiconductor company, primarily owing to the robust accretion opportunities presented to an acquirer (we think Atmel’s 2016 EPS are worth 2x to an acquirer). Stepping back, we think the Street underestimates the true earnings power of Atmel given (1) the intermediate-term cyclical recovery in the core MCU business, (2) new opportunities for IoT products, (3) differentiation through integrated maXTouch and MCU combo products, and (4) new engagements for crypto-memory products.”

Moreover, “However, because of Atmel’s specific manufacturing inefficiencies and a “fatter” cost structure, we believe ATML could yield 95% higher 2016 EPS or $1.06 (15% COGS, 15% R&D, and 40% SG&A). For reference, these synergies account for 20% of Atmel’s current operating costs, slightly above the average synergies expected from recent semi transactions (average ~15% elimination of costs). Even at a 2016E P/E of 12x off that $1.06 (below Street average of 16x), we believe a buyer could justify a ~$13 bid.”

Out of the 12 analysts polled by TipRanks, 9 rate Atmel Corp. stock a Buy, 2 rate the stock a Hold and 1 recommends Sell. With a return potential of -5.3%, the stock’s consensus target price stands at $9.48. 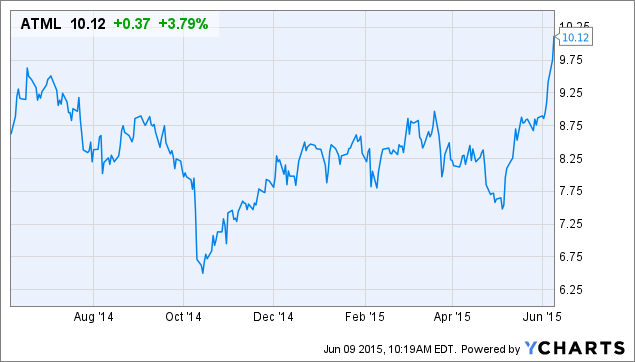