Rolland wrote, “Constructively, the bear case for runaway capex was once again dismayed as the company lowered spending guidance $500 million for the year. Interestingly, management was steadfast on the timing for Skylake in 2H15 (we worry a bit about the potential for a pause in PC shipments ahead of the combination of processor and Win10 OS launch). Additionally, PC revenue in 4Q14 (and 1Q15 guidance) was slightly disappointing as we worry about XP refresh tailwinds dissipating. Lastly, the Broadwell ramp appears more expensive than anticipated, creating sizable GM differences for 1Q15 (60.0% guidance versus the Street’s 61.2%), a negative in our view.”

The analyst continued, “Overall, while the lack of growth in PC has been discouraging, we believe that Moore’s law is considerably more durable than any one computing form factor and presents as good a business plan as any in the technology industry. We are increasingly confident that Intel can opportunistically extract value from the extra transistors afforded to it through the best silicon manufacturing operations in the world.” 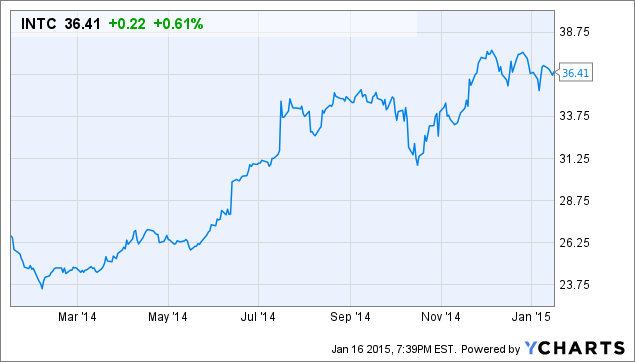