FBR Capital analyst Daniel Ives weighed in today with a few insights on Microsoft Corporation (NASDAQ:MSFT), after the software giant announced a large restructuring plan that includes a head-count reduction of up to 7,800 employees expected to be completed by the end of FY16. In conjunction with the restructuring announcement, Microsoft also announced that it would be recording an impairment charge for assets related to the Nokia Devices and Services business, as well as a restructuring charge.

Ives wrote, “While the cuts will be painful for employees, they were necessary, in our view, and speak to Nadella’s attempt at cleaning up part of the mess that Ballmer left behind in Redmond, as the Nokia acquisition was a head-scratcher to begin with, in our opinion. Overall, we believe Nadella’s proactive approach at cleaning up the Nokia acquisition is a positive “tipping of the hand” around Microsoft’s future focus on software (versus hardware) as the company heads into a pivotal year, with Windows 10 front and center as a major product catalyst.”

The analyst maintained an Outperform rating on MSFT, without suggesting a price target.

According to TipRanks.com, which measures analysts’ and bloggers’ success rate based on how their calls perform, analyst Daniel Ives has a total average return of 8.1% and a 60.3% success rate. Ives has an -1.3% average return when recommending MSFT, and is ranked #496 out of 3692 analysts.

Out of the 31 analysts polled by TipRanks, 17 rate Microsoft stock a Buy, 10 rate the stock a Hold and 4 recommend Sell. With a return potential of 8.0%, the stock’s consensus target price stands at $48.32. 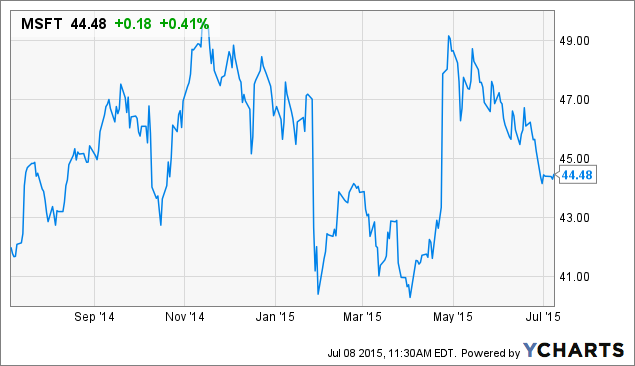