FBN Securities analyst Shebly Seyrafi was out pounding the table on GoPro Inc (NASDAQ:GPRO), reiterating an Outperform rating and price target of $75, which represents a potential upside of 73% from where the stock is currently trading.

The analyst reasoned his bullish rating by noting, “We reiterate our Outperform rating on GPRO and strongly recommend purchase as the company continues to grow at robust growth rates (e.g. 75% Y/Y top-line growth last quarter) while its shares have meaningfully pulled back. With shares now down by 58% from its 52-week high of $98 and by 37% over the past three months, investors have an opportunity to buy a category killer at an attractive price.”

Furthermore, “Shares of GPRO came under pressure in early March on concerns about Xiaomi’s entry into the sports camera market with its Yi Action Camera, particularly as the latter is priced at a meaningful discount. However, some recent reviews have not been so favorable.” Additionally, “GPRO’s stock had been under pressure partly in anticipation of the lockup expiration that took place on February 17 when 76M shares (slightly over half of shares outstanding) became unrestricted. Although we believe that since the lockup expiration many shares have been sold, we believe that much of the selling pressure has now been reduced.” 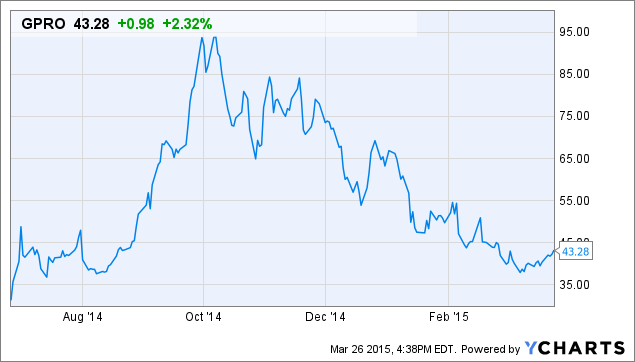