In a research report released Monday, William Blair analyst Ryan Merkel maintained an Outperform rating on Fastenal Company (NASDAQ:FAST), following the release of the company’s August average daily sales report, where there was a growth of 15%. No price target was assigned.

Merkel wrote, “August average daily sales (ADS) growth of 15.0% was above our 11.6% model, and growth accelerated despite a 400-basis-point-harder comparison. Fastenal said manufacturing activity is picking up, but that it is not quite the strength implied by a 59 ISM. Sequential ADS improvement of 5.8% was much better than the historical average near 2.5%; however, July fell short of the trend. We are encouraged by the result, but we caution investors not to get overly excited about one month. Two months of double-digit fastener growth is a big positive, and nonfastener sales growing near 19% is well ahead of peers. With the calendar less favorable in September, we believe growth will moderate some. Operating leverage should begin to improve as year-over-year full-time equivalent (FTE) growth and gross margin comparisons ease.”

Merkel noted, “Our view is that Fastenal can still deliver differentiated earnings growth, and we expect our thesis to be proven in the second half of 2014. A sequential improvement in gross margin would go a long way toward improving stock sentiment. While the recent gross margin weakness surprised us, Fastenal sales growth is outgrowing the industry by a wide margin. An improving mix to higher-margin fasteners is a positive tailwind.” 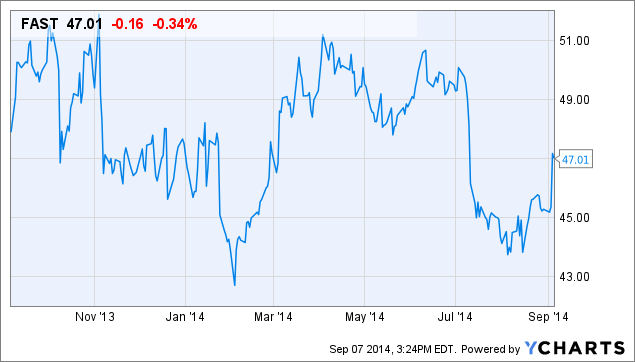