In a research report published today, Deutsche Bank analyst Robyn Karnauskas maintained a Buy rating on Gilead Sciences (NASDAQ:GILD), but reduced her price target to $125 (from $142), as Express script’s decision to block Harvoni in GT-1 patients completely has ‘ignited a price war in the HCV market’, in her view.

Karnauskas commented: “We are lowering our HCV numbers for GILD & model higher discounts to compete with Abbvie pricing. We estimate GILD gross to net would now be ~30% (vs. 18% prev). We also assume 5% lower market share for GILD in 2015 & out-years. We believe at current price of ~$95/sh, GILD is trading close to our DCF value which gives no credit to pipeline. Pipeline readouts in 2015 & capital allocation could drive upside in 2015.”

Furthermore the analyst noted, “We see current GILD situation similar to the one before Pharmasset acquisition. Over 2015, we see investor focus shifting to other bigger opportunities such as HBV and NASH. NASH could be a ~$12B opp’y with phase 2 readout in Mid’15. NASH at 100% probability could add $14/sh to DCF. HBV strategy could also become more clear in 2015 which could potentially add $20/sh to DCF.” 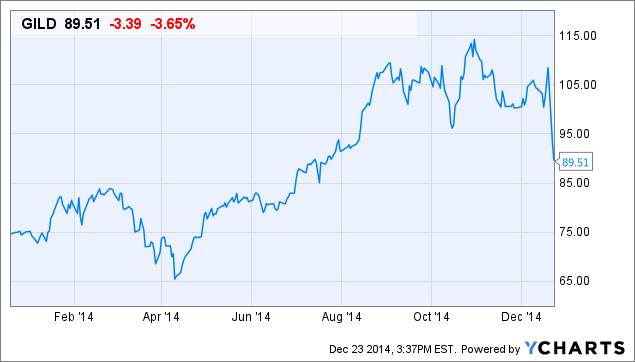