In a research note published this morning, William Blair analyst Jason Ader retained an Outperform rating on Aruba Networks (NASDAQ:ARUN), on the heels of investor meetings with CEO Dominic Orr. No price target was provided.

Ader wrote, “We believe that last quarter will prove to be an inflection point in investor sentiment, and we continue to expect that Aruba will climb the wall of worry in coming quarters, leading to an upward re-rating of the multiple. In addition, we expect Aruba to post better-than-expected results for the next several quarters as pipeline and visibility seem very strong, driven by significant product momentum (11ac, Instant, ClearPass), expanding sales and distribution (up- and downmarket), new go-to- market alliances (Juniper [JNPR], HP [HPQ], etc.), and waning competition from Cisco (CSCO). Aruba believes that on the strength of 11ac and growing traction in the SME space, the company can achieve 20% market share in enterprise WLAN over the next few years (up from roughly 14% today)—an ambitious but realistic target, in our view.”

Ader continued, “While we recognize that some of Aruba’s near-term momentum is being driven by the 11ac upgrade cycle and the 50% bump in salesforce capacity, our thesis continues to be that: 1) the enterprise wireless market is undergoing a secular paradigm shift in which wireless is becoming the primary architectural decision point in the access network for an increasing number of customers (moving from “fries” to “burger” in the “happy meal”) and 2) this shift plays to Aruba’s strengths as a wireless specialist with a differentiated suite of security and management software (if wireless is the primary on-ramp to the network, it had better be resilient and secure) and is orthogonal to Cisco’s business model (to protect the wiring closet).”

According to TipRanks.com, which measures analysts’ and bloggers’ success rate based on how their calls perform, analyst Jason Ader has a total average return of 7.3% and a 57.1% success rate. Ader has a 17.9% average return when recommending ARUN, and is ranked #854 out of 3304 analysts. 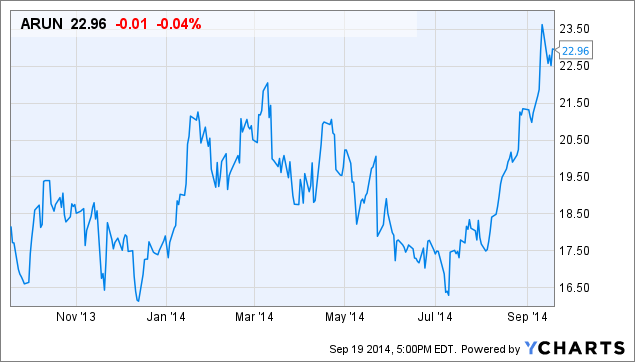