We Expect Under Armour Will Meet Or Modestly Exceed Our 3Q14 EPS Estimate, Says William Blair

In a research note published today, William Blair analyst Sharon Zackfia maintained an Outperform rating on Under Armour (NYSE:UA) ahead of the company’s release of its third-quarter results. No price target was assigned.

Zackfia wrote, “We believe sales trends remained very healthy in the third quarter and project revenue growth of 28%, to $924 million, above the consensus of $925 million and representing only a slight downtick from 30%-plus revenue gains the past three quarters. We expect continued strength in both apparel and footwear, with apparel up in the high-20% range and footwear up 30%-plus. We also project midteens growth in accessories and a 40%-plus gain in the licensed business.”

Zackfia continued, “We also expect management will provide its initial outlook for 2015, and, similar to last year, we expect management will guide to revenue and operating income toward the lower end of its 20% to 25% long-term target, versus our projection for 2015 revenue growth at the midpoint of the range and operating income growth toward the higher end of the long-term range. Notably, management beat its initial operating income growth guidance by 450 basis points in 2013 and 300 basis points in 2012 and has raised its operating income growth each quarter so far in 2014, so we believe any initial outlook will likely prove conservative. For 2014, our EPS estimate is $1.18, up 25% and versus the consensus of $1.21.” The analyst added, “Under Armour’s stock has been under pressure, down 10% over the past month, as investors are likely taking some profits ahead of the beginning of more-difficult comparisons beginning in the fourth quarter. While we would not argue for multiple expansion from 55 times our 2015 EPS estimate, we continue to like shares given Under Armour’s extraordinarily strong top-line trends in the United States and increased evidence that the company is executing well on its longer-term opportunity to build a significantly larger global premium athletic brand while delivering consistent 20% to 25% EPS growth notwithstanding continued investments to support future growth.” 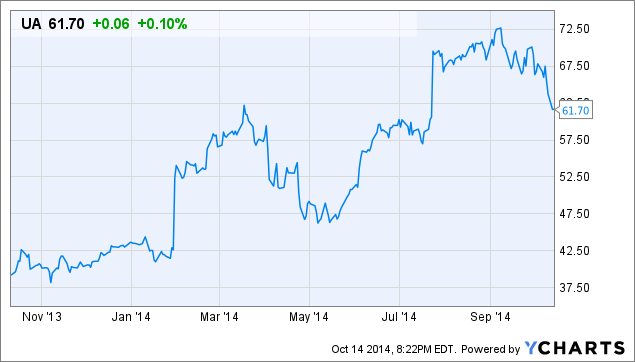