Exact Sciences: We Expect Volatility To Continue But Remain Bullish On The Stock, Says William Blair

In a research note issued today, William Blair analyst Brian Weinstein reiterated an Outperform rating on Exact Sciences Corporation (EXAS) ahead of CMS pricing and miscellaneous data points on early launch and coverage, according to the analyst.

Weinstein explained, “This promises to be another veryactive week for trading in Exact Sciences and comes on the heels of two weeks of very strong volumes and wild price swings. In sum, the stock has been quite strong and has made a string of new highs following the FDA approval and CMS preliminary national coverage determination on August 11. With that milestone in the rear view mirror, we are now waiting anxiously as there is a very strong likelihood of a CMS pricing decision at some point this week. In addition, there has been noise about which private payers will and will not initially cover the test.”

The analyst added, “With FDA approval and proposed CMS coverage now complete, we wait for the HAPG pricing decision any moment now as the next catalyst for the stock. This will be followed by full commercialization early next year. While we expect the launch to be positive, we believe that some Street revenue estimates remain aggressive for2015 and we continue to point to estimates a few years out as the way to measure the power ofthe product. For our part, we are comfortable with our conservative $47 million in revenues for next year and roughly $300 million in revenues for 2018. All told, we remain bullish on the stock as we continue to have a strong belief in the product, the market it addresses, and management’s positioning of the company for commercial success. With the FDA approval and proposed coverage determination now behind the company, we once again reiterate our Outperform rating on this stock as our base case model build still supports solid upside from current levels. But hold on tight, because the coming days (and months) could be filled with significant volatility as traders play with this name and the dust settles on what all of the new information being put into the market actually means to the company’s long-term prospect.” 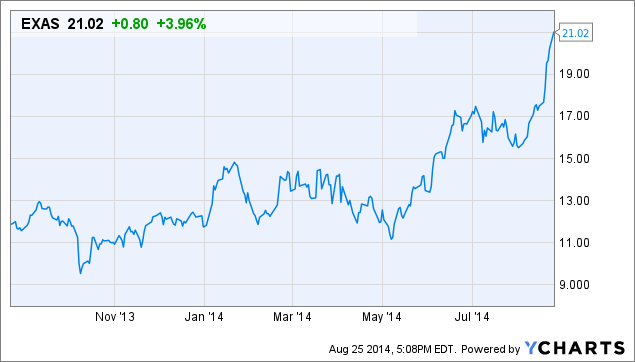