In a research report released Friday, Roth Capital analyst Chris Lewis reiterated a Buy rating on Exact Sciences (NASDAQ:EXAS) and raised his price target to $30 (from $20), following the news that the Centers for Medicare & Medicaid Services (CMS) issued its final National Coverage Determination for the company’s Cologuard and released 2015 Clinical Lab Fee Schedule preliminary payment determinations, which recommend Cologuard be priced using a crosswalk methodology equating to $502 per test.

Lewis noted, “We view the news as a significant win for the company and the long-term commercial outlook for Cologuard. While we had viewed our modeled assumption of $300 as likely conservative, we assumed CMS would likely apply some amount of discount to the $502 amount proposed by the company. In addition, we expect this will support and potentially accelerate reimbursement coverage discussions with private payers.”

The analyst explained his new price target saying, “We have raised our target price to $30, from $20, based on our adjusted pricing assumptions. We would expect meaningful upward revisions to Street estimates as pricing becomes finalized. It is important to remember nearly one-third of Exact’s stock float is short, with reimbursement being one of the key short thesis arguments.” 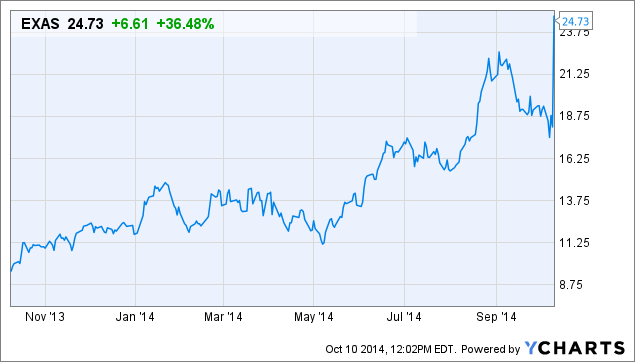