In a research note published this morning, Cantor Fitzgerald analyst Irina Rivkind reiterated a Buy rating on Evoke Pharma (NASDAQ:EVOK) with a $20 price target, which represents a 250% upside from where the stock is currently trading.

Rivkind wrote, “To us, the stock now looks even more undervalued. Fundamentals have not changed for the company, so we think the decline in the stock does not make sense. Management notes that it remains on track to complete its Phase III trial of intranasal metoclopramide for the treatment of diabetic gastroparesis in women in mid-2015. Additionally, Evoke is ahead of schedule in wrapping up its QT interval cardiac safety trial by the end of 2014, which should be the next catalyst for the stock. We continue to view Evoke as an attractive M&A target in the GI space.”

Rivkind believes that people should like the stock because, “(1) Other GI companies such as Ironwood are also interested in developing gastroparesis therapeutics, and we believe that noise about the category and large market opportunity (2M metoclopramide treated patients) could be favorable to Evoke. Any M&A in the GI universe could also highlight the attractiveness of Evoke’s specialty focus. (2) The clinical program is low-risk, in our view, since intranasal metoclopramide already demonstrated efficacy on an a priori pre-specified efficacy endpoint (looking at the composite gastroparesis symptom score by gender) in Phase II. (3) Evoke’s drug has patent protection to 2030, which supports its attractiveness to a potential acquirer. (4) Given its large retail ownership, we expect the stock to appreciate as we head into the data, as is common in biotech names.” 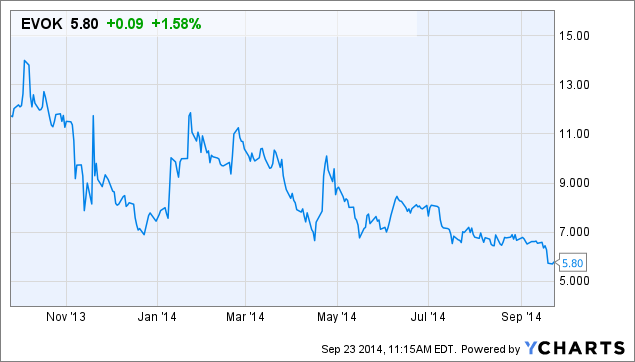