In a research report published today, Oppenheimer analyst Ittai Kidron maintained an Outperform rating on EMC Corporation (NYSE:EMC) with a price target of $33, which represents a potential upside of 15% from where the stock is currently trading.

Kidron noted, “Following our EMC channel checks (25 interviews in US/Europe), we see potential for a soft 4Q14 followed by a stronger March view. The Dec. checks revealed modest macro headwinds and concerns in the US related to Federal seasonality (down QoQ). But commentary was generally positive on overall deal flow into the March quarter, the new product ramp, and pointed to normal competitive forces.”

The analyst continued, “While we see minor risks to 2015 guidance, we believe a new CEO (2015 transition) could be more aggressive with cost cutting and capital allocation, while activist pressure remains an ongoing catalyst for change. Overall, we see limited downside and potential for accretion after 2015 targets are laid out.”

In conclusion, “Despite modest risk for the initial 2015 guide, we see too many positive catalysts in the fresh product portfolio and management/activist wild cards that offer positive leverage to bet against EMC at current levels. Maintain Outperform looking for accretion once the 2015 view (including VCE) is set.” 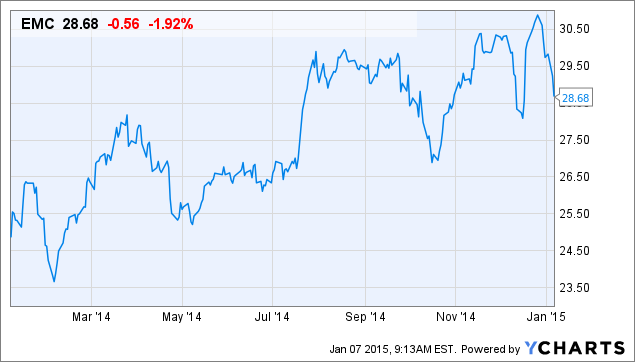