Durata Therapeutics: We Recommend Adding To Positions At These Levels, Says Roth Capital

In a research report issued today, Roth Capital analyst Ed Arce maintained a Buy rating on Durata Therapeutics (NASDAQ:DRTX) with a $26 price target. The report follows this morning’s conference call made by the company’s competitor The Medicines (NASDAQ:MDCO) to discuss its planned October launch of Orbactiv (oritavancin). MDCO set the WAC price of Orbactiv at $2,900, an aggressive 35% discount to DRTX’s Dalvance’s price of $4,470.

Arce noted, “With a single-dose Dalvance option likely on the horizon, we see Orbactiv’s price as a sign of competitive weakness, as hospitals are unlikely to select a long-acting IV antibiotic on pricing alone. MDCO set the WAC price of a single 1,200 mg intravenous (IV) dose of Orbactiv at $2,900, which compares to $4,470 for 1,500 mg, in two doses, of IV Dalvance. We note that based on Durata’s market research, using the same Premier database and ISPOR data that MDCO used, Durata set the value proposition range for the outpatient treatment of ABSSSI with Dalvance at $3,000-$4,500. So, with both drugs now priced, it appears MDCO countered Durata’s pricing of Dalvance at the high end of the range by setting the Orbactiv price at about the low end of the range. MDCO did admit that it was very conservative in its estimates and that its pricing leaves “more value to be realized”.”

The analyst concluded, “With DRTX shares down nearly 10% since Thursday, we recommend adding to positions at these levels.” 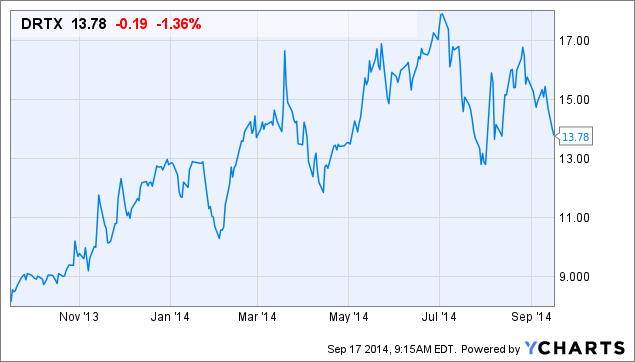 Durata To Be Acquired by Actavis; We View The Cash Bid As Reasonable, Says Roth Capital