In a research note published this morning, Deutsche Bank analyst Rod Lache reiterated a Buy rating on Delphi Automotive (NYSE:DLPH) with a $90 price target, following a meeting with DLPH’s management.

Lache wrote, “We came away from our discussions with reinforced confidence in the company’s earnings outlook for 2014 and beyond. And we also re-confirmed our expectation of accelerating organic growth in 2H14 vs. 1H14. We viewed this significant in the context of rising investor concerns amidst moderating N.A. demand growth, very weak European growth (and the potential for drags from Eastern Europe), moderating China growth, sharp declines in South America, and FX headwinds. We are not suggesting that Delphi is immune to these headwinds. The 10c decline in the Euro since the end of Q2 calibrates to approximately $500 MM revenue and $50 MM EBIT. And a 5 point downward revision to South American production (-20% instead of – 15% expected) could represent a $45 MM revenue/$4 MM EBIT variance. However, we would note that Delphi has historically incorporated significant conservatism into their earnings guidance. And we also believe that Delphi has some flexibility with respect to the timing of discretionary IT spending (which was previously expected to increase by $75MM this year). Hence, we believe that DLPH is on track with their 2014 guidance (EBIT $2.0bn-$2.05bn). We also believe that there are other elements of conservatism incorporated into our estimates, including the pace of share repurchases, and the fact that we have not included any prospective acquisitions into our estimates. DLPH recently closed two small connector acquisitions, and they are assessing 50 others. The increased probability of significant strategic actions should also be viewed as a source of potential upside (these are immediately accretive).”

The analyst continued, “Overall, we believe that the market is overlooking the fact that the content cost headwinds increasingly being cited by Automakers also correspond with accelerating growth opportunities for select suppliers. And we view it as significant that the key areas of focus being highlighted by Automakers (i.e. Active Safety, Vehicle Connectivity, Fuel Efficiency Technologies) also represent Delphi’s core businesses. We believe that DLPH is achieving a very impressive 60% win rate on bids, and that they are outperforming their peers in key growth segments (DLPH believes that they are growing at 2x the Industry in Active Safety). We also believe that Delphi is also closing in on opportunities that could propel significant upside to our growth expectations well into the next decade. During our visit, we observed a test vehicle that was achieving 64 MPG at 50 MPH using Gasoline Direct Compression Ignition technology. This is an impressive new internal combustion technology is achieving a 38% improvement in fuel economy. And Delphi appears to be at the forefront.”

According to TipRanks.com, which measures analysts’ and bloggers’ success rate based on how their calls perform, analyst Rod Lache has a total average return of 15.9% and a 51% success rate. Lache has an 20.8% average return when recommending DLPH, and is ranked #251 out of 3329 analysts. 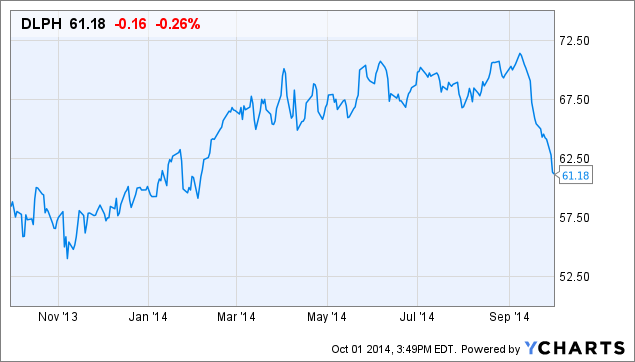