In a research note released this morning, Deutsche Bank analyst Gregg Gilbert reaffirmed a Buy rating on Mallinckrodt (NYSE:MNK) with a $102 price target ahead of MNK’s announcement of its F2015 guidance.

Gilbert noted, “We view the guidance event as particularly important given that MNK will discuss expectations for Acthar (now its largest product) for the first time since taking control of the asset. Based on MNK’s history of guiding conservatively, we would not be surprised to see management set targets for F2015 that are below our above-consensus estimates, with Acthar being a potential area for conservatism. Beyond Acthar, we look forward to updates on the rest of the business, including strategic priorities. While the stock has had a nice run, we are sticking with our Buy rating based on the strength and growthiness of the base business and potential for value-added deals. Recent management commentary suggests that MNK is ready for additional deals, potentially in the near term.”

Gilbert continued, “Given the size of Acthar (~30% of revenue) and newness to MNK (closed the QCOR acquisition in mid-August), we believe that management may set conservative expectations for sales. We model Acthar sales of $1.2bn in F2015, which reflects 19% growth. While solid, this represents much slower growth relative to recent years. For reference, modeling 30% growth would raise our 2015E EPS to $7.56, while 10% growth would lower it to $6.34. Potential areas of conservatism in our model include gross margin and operating expenses, as we do not assume continued gross margin expansion or operating expense reductions for legacy MNK (ex-Acthar).” 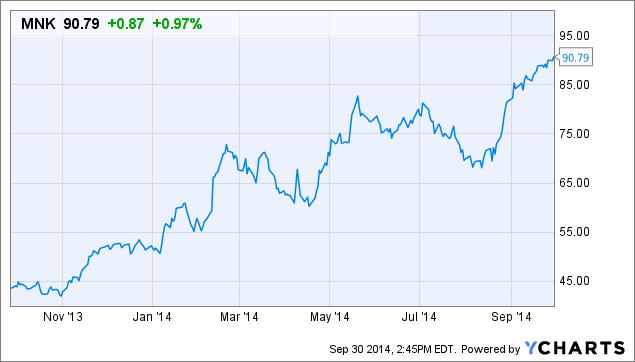 We Like This Mallinckrodt PLC (MNK) Deal to Take Over Sucampo, Cheers Louise Chen