Linenberg noted, “As we expected, JetBlue’s management unveiled a series of value-enhancing initiatives that they intend to implement over the next few years, which we think will be accretive to the company’s bottom-line and improve its ROIC. What we were pleasantly surprised to hear, however, was that those initiatives are expected to boost annual pretax profits by $450 mm, which is ~$100 mm greater than we originally anticipated. Breaking down the aggregate benefit, $200 mm is expected from the introduction of fare families, $100 mm is expected from the company’s cabin refresh strategy, and $150 mm will be driven by “new and ongoing initiatives”.”

The analyst added, “We are raising our 2015 EPS estimate to $1.10 (vs. consensus of $1.01) from $0.90 primarily to reflect the aforementioned value-enhancing initiatives JBLU is expected to roll out over the next three years. We are also raising our 12 month PT to $17 from $13; our PT is primarily based on a 15x P/E multiple. A key risk for JBLU is fuel price volatility.” 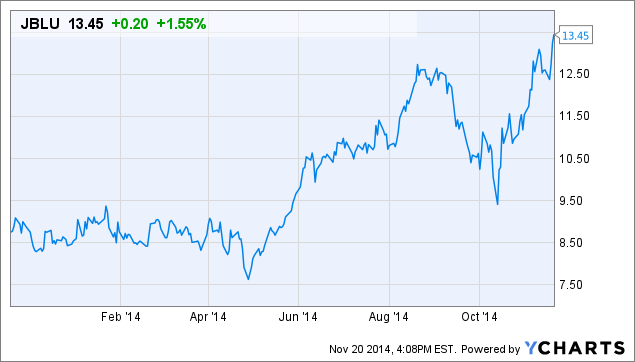 4 Questions All Airline Stock Investors Must Have Answered