Lehrich noted, “HCA pre-announced Q3 adjusted EBITDA of $1.828 billion or 8% above Street consensus of $1.6976 billion and also above DB’s Street-high $1.787 billion. HCA also raised EBITDA guidance by 3%, which should set the stage for additional revisions to consensus. Drivers of the Q3 beat included strong volumes (key volume metrics were BETTER than Q2 YoY growth), solid pricing growth, and continued momentum with regard to ACA benefits (implied by HCA raising its guidance on ACA benefits by $100M+ for CY 2014). While investors had been widely anticipating an HCA pre-announcement, we believe the news will be taken well given recent trading volatility. Importantly, we believe HCA’s results (detailed below) suggest a broader-based utilization recovery is afoot in HCA’s markets.” 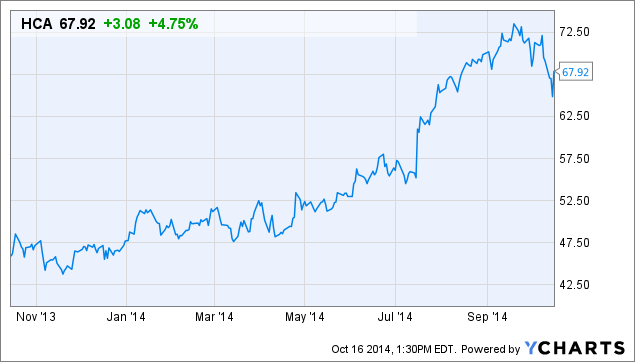 The Best Long Bets Made By Major Hedge Funds In 2014; Apple Marks A Winning Year