Salmon wrote, “Discussions focused on: Express’ $1.6 billion profit improvement plan, the opportunities and challenges associated with robust e-commerce growth, Ground’s go-to-market strategy, drivers of improved performance at Freight, trucking capacity constraints, pricing initiatives (including DIM adjustments), as well as capital allocation and shareholder returns. We left the meetings with increased conviction in FDX’s near- and longer-term earnings power, and believe FDX is poised to expand margins further as the company benefits from: above-average growth at Ground (a 17-20% operating margin business that generates ~25% ROA), its $1.6 billion profit improvement plan (management reiterated its expectation to realize 75% of the plan on a run- rate basis as the company exits FY2015), continued margin expansion at Freight in a strong LTL operating environment, a 4.9% across the board GRI in CY2015 (which is a full percentage point higher y/y- Ground will also benefit from the DIM adjustment beginning in January 2015), and a more favorable volume growth outlook.”

The analyst continued, “Management was very confident in its ability to achieve the $1.6 billion profit improvement plan at Express. The confidence is driven by the company’s cost initiatives (the voluntary buyout plan exceeded expectations, newfound sourcing opportunities, and expected P&D density tailwinds), aircraft renewal program, and a better pricing environment (which will likely exceed the original $150 million target) though the international backdrop is more challenging given the trade-down effect and slower global trade growth than originally anticipated. In addition, Express has significant operating leverage to volume growth given its fixed cost P&D structure and management’s plan to maintain a roughly flat aircraft fleet (which should provide the potential to upgrade mix as IP [and other higher-yielding] volumes build).” 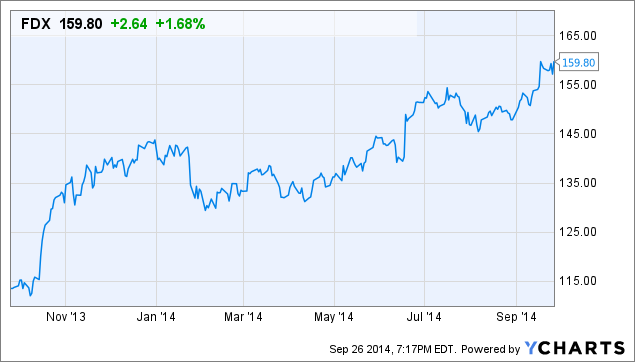 Insiders Pull the Trigger on These 3 Stocks on the Cheap