Bedell noted, “SCHW’s 3Q14 EPS of $0.24 was in line with Consensus and our estimate of $0.24. However, we view core EPS close to $0.25, excluding a net pretax insurance recovery of $45mn, our estimate of ~$10mn in securities gains and a pretax charge of $68mn related to future changes in SCHW’s geographic footprint. The beat to our forecast on a core basis was driven by 2% higher revenue than expected, with 2% beat on NII and 1% beat on asset mgmt fees. Overall, we see it as a solid quarter with good continued traction in fee-generated assets, stable NIM despite lower yields, & good cost control w/core op margin of 36% vs our 35% est. SCHW remains our top pick in e-brokers. SCHW shares beginning to price in lower-for-much longer rate scenario With SCHW shares down 18% from September peak to current $25.32 we see the stock valued much more closely to a stagnant multi-year interest rate scenario than our rate normalization base case.” 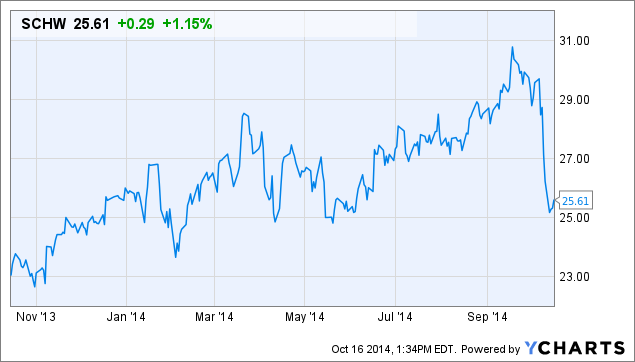 Charles Schwab: We Continue To Like The Stock, Says William Blair