Deutsche Bank Comments On Yandex N.V. Ahead Of 3Q14 Results; Reduces PT To $29

In a report released today, Deutsche Bank analyst Lloyd Walmsley reiterated a Buy rating on Yandex N.V. (NASDAQ:YNDX) and reduced his price target to $29 (from $34), ahead of the company’s third-quarter results, which will be reported before the open on 10/23.

Walmsley commented: “We trim our 4Q and 2015 estimates for Yandex on deteriorating macro in Russia, despite solid search trends in 3Q. Weak macro has been compounded by geopolitical turmoil, sanctions, slower growth globally, weakening FX, and falling energy prices. We trim our 2015 revenue growth outlook to 19% Y/Y (from 23% previously). We see downside risk to estimates on weakening oil prices but view this as increasingly priced in for Yandex. Two things should mitigate downside risk to shares: (1) ad tech improvements and (2) headlines / potential for global Internet players to pull back in Russia as we approach the 2016 deadline for local data storage.”

The analyst added, “Macro risks to Yandex are somewhat offset by (1) ad tech improvements that could unlock more budget and (2) the potential for international Internet players, and Google in particular, to see difficulties in Russia leading to share gains for Yandex. Since our trip to Moscow last summer, the pressure on international companies in general and within the Internet space has intensified. Given we estimate that Google generates less than US$500M in revenue in Russia, or 0.6% of gross revenue (vs. US$1.3B for Yandex text-based ad revs in 2015), we do not think it will sacrifice data security to continue operating in Russia if it comes down to that. We do not expect this to be a near-term catalyst, but as the compliance deadline in mid-2016 approaches, we expect this to increasingly become a focus among investors.” 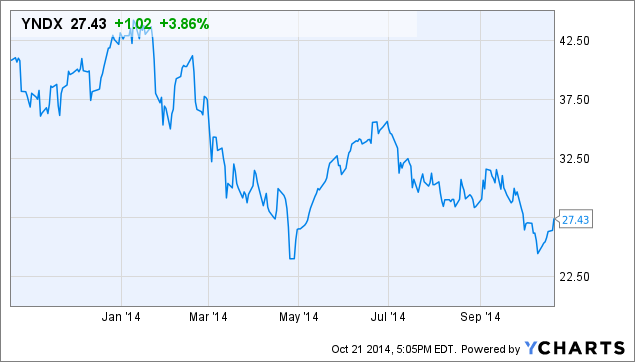