In a research reprot sent to investors today, Deutsche Bank analyst Jorge Beristain maintained a Sell rating on Coeur Mining (NYSE:CDE) with a $4 price target, as the company announced an all-cash deal for Goldcorp’s (NYSE:GG) Wharf heap-leach gold-silver mine near Lead, South Dakota.

Beristain observed, “There is downside risk to a base-case scenario of annual gold production of 88k oz at $840/oz All-in Sustaining Costs (AISC) over the 7-year mine life, given recent output averaging ~25% less at 65k oz/year and ~$900/oz AISC. Notwithstanding an estimated project IRR of 22%, DB views Wharf to be modestly NPV accretive at $0.59/share, assuming current spot gold of ~$1,200/oz. This is Coeur’s fourth acquisition in the past two years with cumulative M&A deals of over $600m exceeding its current market cap.” 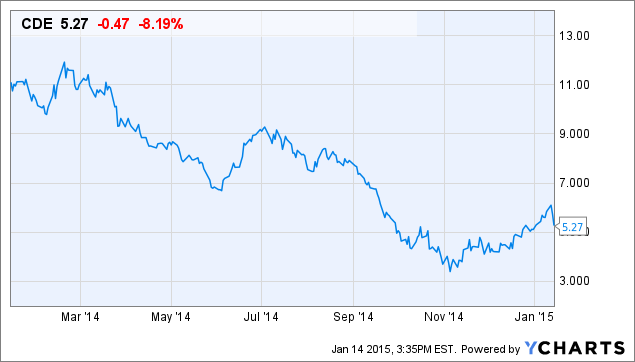