Depomed: We Remain Neutral On The Name But With A Positive Bias, Says Roth Capital

Yesterday, Roth Capital analyst Scott Henry issued a note in which he reiterated a Neutral rating on Depomed Inc. (DEPO) with a $13.50 price target, following the company’s second-quarter results.

Henry wrote, “DEPO reported revenue of $67.7 million, which was well ahead of our $40.0 million target. However, after excluding all the 1X noise, product sales of $28.2M roughly matched our $28.6M target. Spending was higher than target, but this was more than offset by a $5 million milestone received from Mallinckrodt (which we had targeted in 3Q14). Net, the “cash EPS” of a positive $0.01 was ahead of our targeted cash EPS loss of $0.01. Overall, we viewed the quarter as fundamentally within the range of expectations. On a positive note, the company appears cash flow positive from here on out. Henry added, “We remain Neutral rated on the name, but with a positive bias. The key levers remain Gralise patent litigation (coming soon) and future acquisitions. We are positively biased on each of these levers, and would become more aggressive on shares upon weakness”. 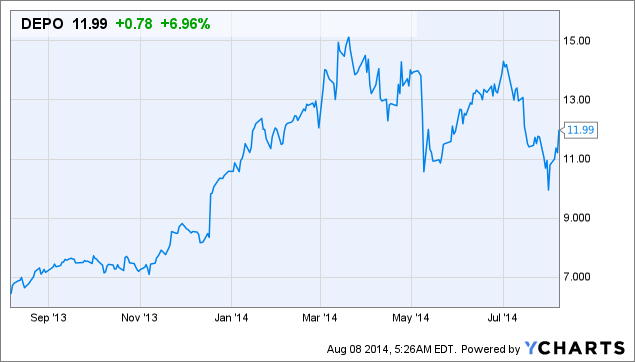