Dendreon: We Would Continue To Recommend Selling Shares, Says Wedbush

For the first time, Dendreon Corp. (DNDN) acknowledged the magnitude of the risk its 2016 convertible debt has on shareholders.In its 10-Q filed this week, DNDN stated: “there is a significant risk that, while we believe we have sufficientcash to meet our ordinary course obligations for at least the next twelve months, we will not be able to repay or refinance the 2016 Notes. Accordingly,we are currently considering alternatives to the repayment of the 2016 Notes in cash, including alternatives that could result in leaving our current stockholders with little or no financial ownership of Dendreon”.

In reaction, Wedbush analyst David Nierengarten reiterated an Underperform rating on DNDN, with a $0 price target.

Nierengarten commented: We would continue to recommend selling shares of DNDN, as we believe there is little-to-no value to its common shares due to the unprofitability of the Provenge franchise and 2016 debt overhang. We arrive at our $0 price target by estimating that there is little ability for shareholders to avoid either bankruptcy or massive dilution via the refinancing of DNDN’s convertible debt.” 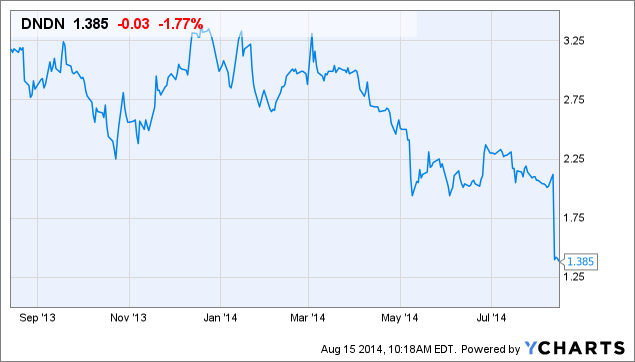