Deere & Company: We Continue To See Downside To The Stock, Says William Blair

The analyst noted, “Deere has been on a delay this cycle to experience weakness, because of its order book and fiscal-year timing. However, it is not immune and is finally starting to see further signs of strain. The company’s talking points have been that agriculture and turf was fine this year and the variability could come from construction, which is turning out to not be the case. Agriculture and turf decremental margins are going to remain weak, as we pointed out in our trip, as the higher-margin large farm machinery products experience weakness. We believe the weakness in agriculture is also becoming broadbased. EU-28 tractor and combine sales for Deere in the month of July were down double digits and Brazil industry sales have been weak all year with worsening sentiment because of lower crop prices. We continue to see downside to the stock; third-quarter results and the weaker outlook gives further credence to our bear thesis.”

According to TipRanks.com, which measures analysts and bloggers success rate based on how their calls perform, analyst Lawrence De Maria  currently has a one-year average return of 4.2% and a 53% success rate. De Maria has a 1.3% average return when recommending DE, and ranked #1502 out of 3228 analysts. 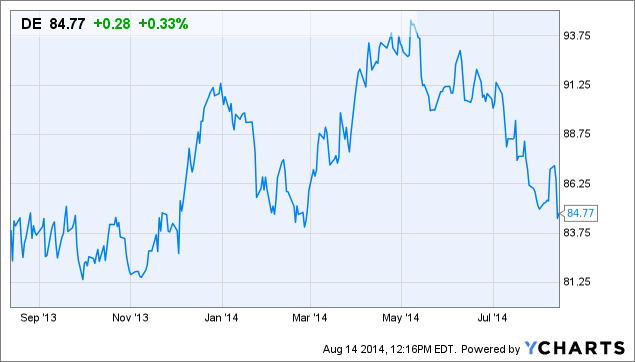