Deere & Company: Next Year Could Be A Tough Year, Says William Blair

In a research note issued Friday, William Blair analyst Lawrence De Maria reaffirmed an Underperform rating on Deere & Company (DE) with a $80 price target, which suggests a potential downside of 10% from where the stock is currently trading.

De Maria wrote, “We came away concerned about the downside into 2015, as the rapidly changing agriculture fundamentals look to worsen beyond this year. We see much less variability in 2014 for Deere in North American agriculture because of the company’s visibility from order programs. Other agriculture OEMs and suppliers (tires, etc.) could have more variability than Deere in the near term for agriculture”.

The analyst continued, “Next year could be a difficult year. Deere’s decremental margins would typically be in the 25% to 35% range though they could be 40% for North American agriculture because of the high profits and high level that the cycle is coming off. In our opinion, large North American agriculture could be down 20% in a reasonable scenario and this business could represent as much as half the company’s profits because of the high margin”.

According to TipRanks.com, which measures analysts and bloggers success rate based on how their calls perform, analyst Lawrence De Maria  currently has a one-year average return of 5.2% and a 59% success rate. De Maria has a -4.2% average return when recommending DE, and ranked #1451 out of 3212 analysts. 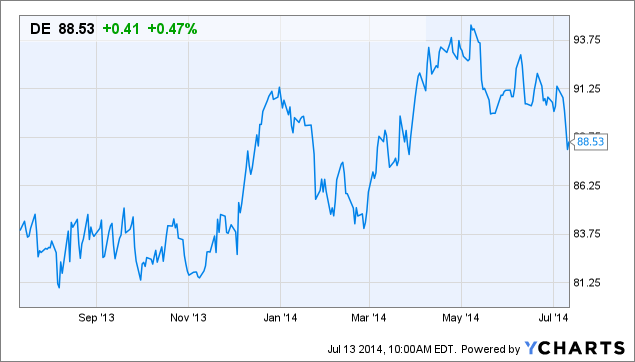