In a research note released today, H.C. Wainwright analyst Andrew Fein reiterated coverage with a “Neutral” rating on Vertex Pharmaceuticals (VRTX), and a $85 price target, which suggests a potential downside of 13% from where the stock is currently trading.

Fein wrote, “While we continue to find it very likely that VX-809 will reach the CF market, we have also gathered significant scientific and competitive nuance that in many ways weakens the case for 809 becoming a steadfast cornerstone therapy in the next decade. We believe that VRTX-independent academic research has already begun to upstage 809, not to mention that in the face of VX-661, 809 is appearing increasingly like an asset rushed towards the clinic prematurely. As the fleet of competitor potentiators and correctors grows, and they continue to outperform 809 in preclinical models, we wonder if 809 will be subject to higher regulatory standards and/or stronger commercial/payor pressure than Kalydeco originally did (we believe that 809 is unlikely to receive pricing at par with Kalydeco in the socio-economic matrix of 2015). Additionally, and importantly, we have previously noted that our conviction in the long- term value for VRTX relied on the assumption that the company has learned valuable lessons from being upstaged in HCV, and will apply these lessons to the CF space by consuming and leveraging early-stage threats which continue multiplying in small competitor pipelines. However, we highlight a recent material shift in the CF landscape: although VRTX continues to retain significant untapped spending power with $1.32B in cash, now several major players have entered development and cannot be easily dismissed or bought out, while in turn small competitors continue to march along producing superior preclinical data. Overall, following our expected Phase 3 win for 809, we now believe that current trading levels reflect appropriate value for VRTX shares”.

According to TipRanks.com, which measures analysts and bloggers success rate based on how their calls perform, analyst Andrew Fein currently has a one-year average return of 7% and a 76% success rate. Fein has a 30.7% average return when recommending VRTX, and is ranked #1222 out of 3222 analysts. 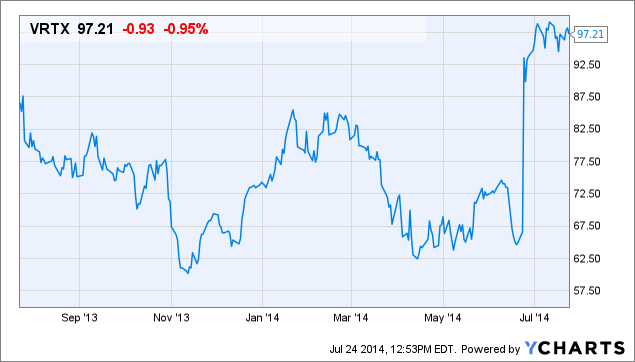