In a research note released today, Wedbush analyst Craig Irwin maintained an Outperform rating on Cree (NASDAQ:CREE) with a $61 price target, following today’s news that Cree and Lextar Electronics entered into an agreement whereby Cree will make an investment in Lextar and the companies will enter into a supply agreement for sapphire-based LED chips.

Irwin noted, “What we like moost about the agreement is this provides a route for Cree to profitably serve the low gross margin low- and mid flux area of the LED chip market, while avoiding the margin dilution that would beseen with a major acquisition or development of internal Gan on Sapphire production capacity. Nichia is the largest LED producer in the market and we understand their gross margins are in the single digits, with the company targeting operating profit dollars. The Lextar agreement will now allow Cree flexibility to pursue volumes using a similar strategy.”

Furthermore, the analyst said, “We expect the stock to be volatile on weak LED Chip volumes, but remain constructive on positive margin performance in spite of headwinds. Gross margin deltas usually drive the most significant changes to Cree’s valuation and we see the positive performance as constructive. Although there will be volatility on the reset in LED Chip volume expectations, we believe downside is fairly well protected around 2xbook or the $49 level, given historic trading ranges, strong 100%+ growth in LED fixtures markets, and the broadly improving industry outlook. We continue to expect theLED capacity cycle to benefit near-term performance.” 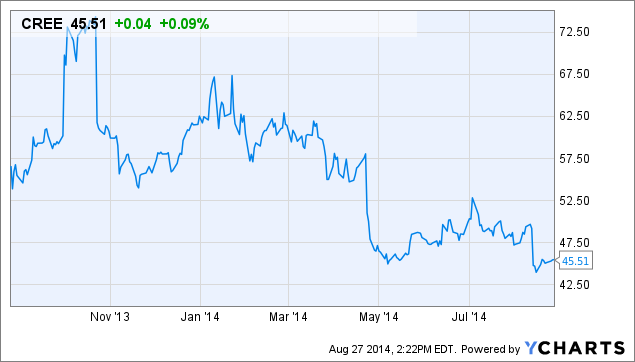