Credit Suisse Reiterates Underperform On Blackberry Ahead Of 3Q15 Results

In a research report released today, Credit Suisse analyst Kulbinder Garcha reiterated an Underperform rating on Blackberry (NASDAQ:BBRY) with a $6 price target, ahead of the company’s fiscal third-quarter results on December 19th.

Garcha wrote, “While the company is trying to facilitate a transition to BES 12 by offering various promotional packages of its MDM platform, we continue to see headaches for the services business, as we believe that 1) subscriber base will continue to erode, 2) ARPU will go down as carriers renegotiate, and 3) services will be difficult to ramp up as the monetization of EZ Pass remains difficult in a competitive MDM market environment.”

The analyst added, “Given the inherent challenges in turning around the services stream, as well as subscale loss making hardware business, we believe the best action for the company is to break up. Assuming shutting down the hardware business by the end of FY15 and winding down the services business by the end of FY16, we arrive at a NAV of $3.1bn ($6 per share), which suggests about a 45% downside.” 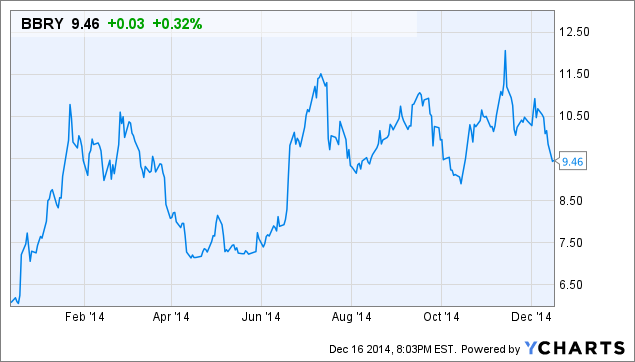