Cowen analyst Phil Nadeau is out with a bullish note on shares of Genocea Biosciences Inc (NASDAQ:GNCA), reiterating an Outperform rating with a $40 price target, which implies an upside of 586% from current levels. (To watch Nadeau’s track record click here)

The reason? Genocea announced data from GEN-003 Phase 2b trial in HSV2 demonstrating significant reductions in several measures of genital lesions through 12 months. Genocea shares closed today at $5.83, up $0.78 or 15.45%.

Nadeau commented, “We are optimistic that GEN-003 will succeed in Phase III, and think that it addresses a significant commercial opportunity. Our consultants have been impressed by GEN-003’s profile and anticipate that patients will be willing to use it. They expect that it will appeal to those patients who want some control of their HSV-2 but are unwilling to take a daily medication. They also think it will appeal to patients who are adherent with their daily Valtrex but want to further reduce their chances of an outbreak, or of infecting a partner. The CDC estimates that 16% of the U.S. population aged >14 has been infected with HSV-2 and that 20-25% of infected people are aware of their status. This implies that GEN-003 could address a market oppy of 8MM – 11MM people in the U.S. alone. Assuming a price of $300 per course, GEN-003’s total addressable market would be $2B+.”

All the 5 analysts polled in the past 12 months rate Genocea stock a Buy. With a return potential of 323%, the stock’s consensus target price stands at $24.67. 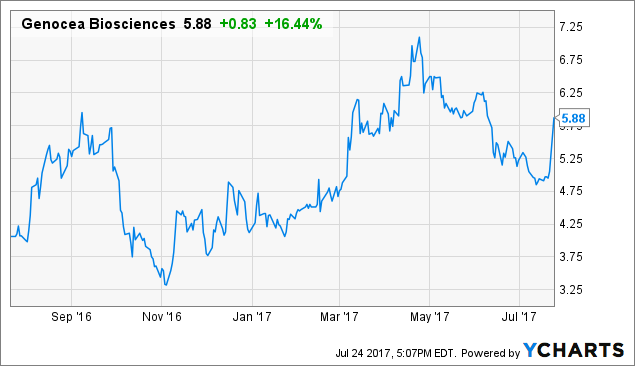