Cowen’s healthcare analyst Phil Nadeau came out with some commentary on Sarepta Therapeutics Inc (NASDAQ:SRPT), after the company released its second-quarter results and provided update on its development program. The analyst rates SRPT a Market Perform, without providing a price target.

Nadeau noted, “Investor focus for SRPT remains on the acceptance status of the eteplirsen NDA, which was submitted in June, as well as likely Advisory Committee proceedings. We do not think SRPT will receive a RTF (refuse to file) from the FDA, and expect to hear from SRPT on acceptance around early Sept. We expect a potential and critical AdComm likely in November 2015.”

However, “We are uncertain of eteplirsen’s clinical profile in relation to a potential FDA and/or EMA approval. Eteplirsen initially appeared to (and later failed to) induce novel dystrophin production and showed significant clinical benefit in its Phase 2.”

According to TipRanks.com, which measures analysts’ and bloggers’ success rate based on how their calls perform, analyst Phil Nadeau has a total average return of 30.7% and a 70.4% success rate. Nadeau is ranked #80 out of 3728 analysts.

Out of the 16 analysts polled by TipRanks, 9 rate Sarepta Therapeutics Inc. stock a Buy, while 7 rate the stock a Hold. With a return potential of 6.3%, the stock’s consensus target price stands at $34.55. 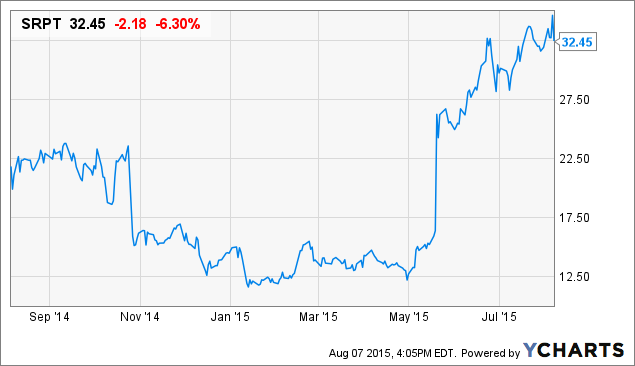