In a research report released Tuesday, Cowen analyst Boris Peaker reiterated a Market Perform rating on AcelRx Pharmaceuticals Inc (NASDAQ:ACRX), after the company released its second-quarter results and hosted a conference call yesterday to report updates of its lead candidate Zalviso. Notably, AcelRx has been granted a General Advice meeting with the FDA to discuss the FDA’s request for a clinical trial and the company’s planned response to the Complete Response Letter issued by the FDA for the New Drug Application for Zalviso.

Peaker wrote, “ACRX will meet with the FDA in September 2015 regarding the additional study requested by the agency. Recall that in March, ACRX reported that the additional clinical study would be needed “to assess the risk of inadvertent dispensing and overall risk of dispensing failures”. Our interpretation is that the Zalviso device did not dispense tablets in a sufficiently controlled fashion, leading to analgesic gaps and with a potential for drug diversion. It is not clear what the FDA’s threshold for dispensing error is, and whether the agency in general does not want Zalviso approved.”

“However, given the potential flaws of the device we believe investors should moderate their expectations for the September meeting. ACRX has not committed to providing immediate disclosure following the meeting and investors may have to wait until a planned analyst day in October for additional color.”, the analyst added.

Out of the 8 analysts polled by TipRanks, 4 rate Acelrx Pharmaceuticals stock a Buy, while 4 rate the stock a Hold. With a return potential of 113.1%, the stock’s consensus target price stands at $9.38. 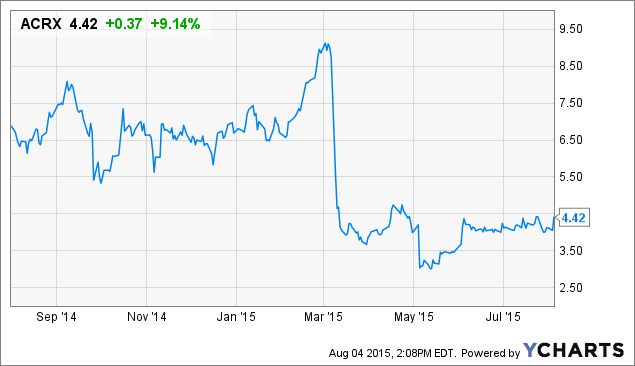